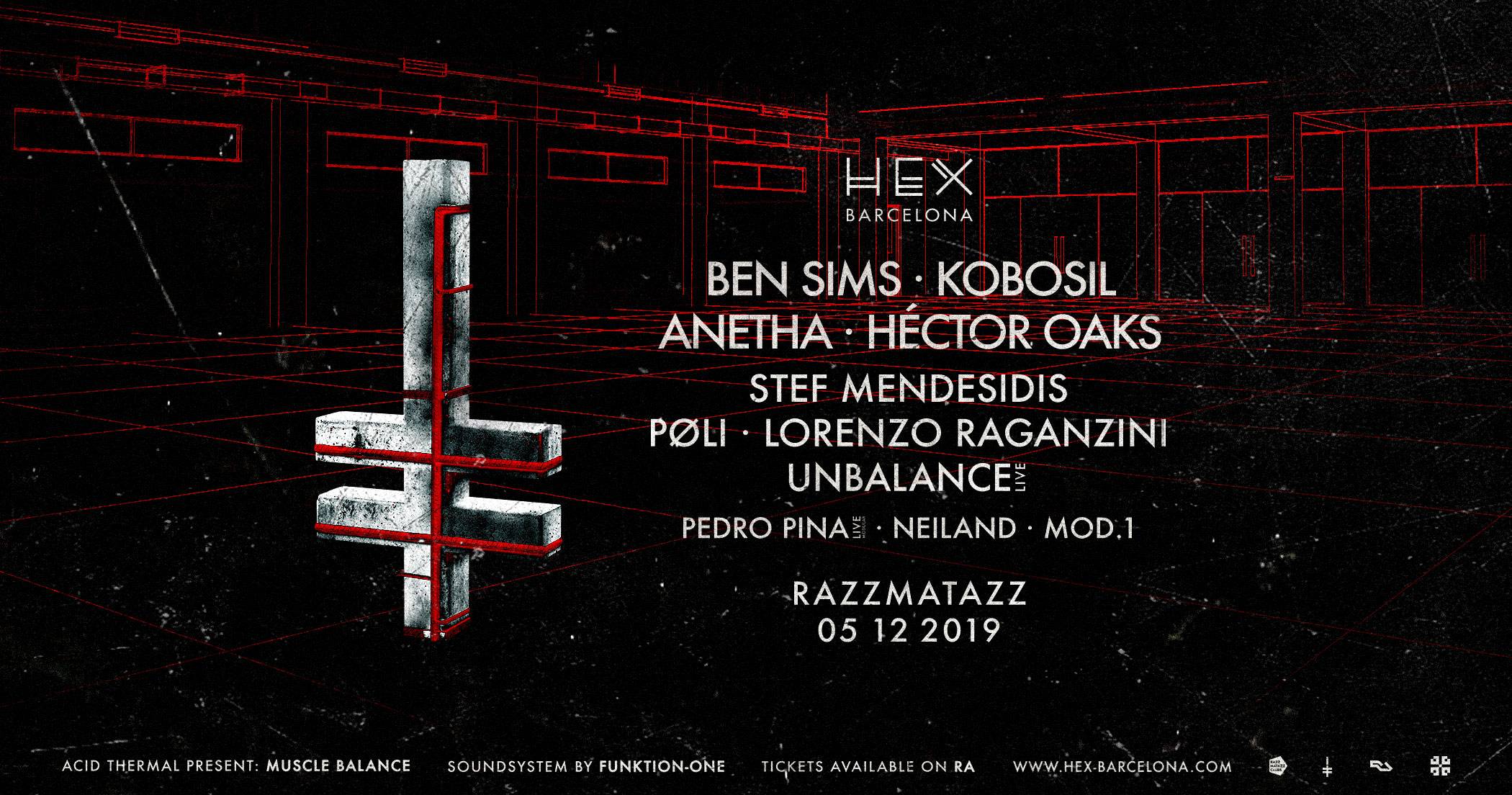 HEX is now ready to come back with its biggest and multispace format, once again and for the fourth time at the iconic Razzmatazz club in Barcelona.

Razzmatazz, is a 3.700m2 industrial warehouse built in 1957 and born as engines factory. Today is a building that has been considered architectonical heritage and that with its 5 different rooms, 2 terraces and endless passages, is considered the biggest club of Barcelona. It’s located in Poblenou, Barcelona, next to the beach of Bogatell.

MORE INFO ABOUT THE ARTISTS:

- Ben Sims
With over 20 years of experience, Ben Sims is one of the most tight, energetic mixers around, having brought his blend of hard and funk grooves on three decks to every corner of the world while transforming and adapting to the changes in the scene.

Ben has put his name on more than 50 releases over the last two decades, with worldwide acclaim. Not a stranger to the movement, we now welcome Ben Sims back at HEX.


- Kobosil
Born and raised in the Neukölln district, his musical aesthetic is shaped not only by his upbringing sound, but also the cathartic energy of EBM, noise and industrial. Releasing regularly on Ostgut Ton, Kobosil also runs his own R - Label Group imprint, which he uses as a platform to promote producers at the forefront of a bleak and riotous approach to electronic music. His fast and aggressive sound lands at HEX for the very first time, at our 4th edition in the iconic Razzmatazz.


- Anetha
The Paris native Anetha covers all the aspects of the music career by being a DJ, producer and label manager. A leading figure of the new generation of French DJ’s inspired by old school Techno tracks, electro and EBM, she always offers an intense, fresh and unpredictable journey to the crowd, with many variations in the sounds she blasts out the speakers.

Regular on Anagram, Possession and with her own imprint Mama told ya, we welcome Anetha to HEX for the first time.


- Héctor Oaks
Herrensauna and Bassiani resident, OAKS and KAOS label head honcho and acclaimed producer, Hector Oaks’ style and selections are known for their stamina and high energy. His constant dedication to the craft of DJ’ing have taught him empathy and intuition for the sounds that make the public vibrate.

His skills extend to his productions, which are not made as tools but rather fit to leave a mark on the dance floor.

One of the world’s most wanted weapons, the Spanish DJ makes his debut at HEX.


- Stef Mendesidis
Stef is currently shaking dance floors of the most significant Techno clubs. His shows are a pure reflection of straight-forward outbreaks and never-ending dynamics that provide a genuine one-of-a-kind experience to passionate ravers.

In sound production, Stef Mendesidis uses a technique of one-take recording, staying loyal to the principle of live Techno creation, and having released influential labels such as Klockworks.

We welcome the Russian talent and resident at Monasterio, for the first time at HEX.


- Unbalance (live)
In his performances, Unbalance endeavours to combine many ages of Techno, pays his dues to classic Techno, receives inspiration from the futuristic sound, and mixes the future with the modern.
His discography includes vinyl releases on labels such as ARTS, PoleGroup, Solid Groove and many others, and also contributed to the legendary Fabric series. The Monasterio resident will bring his powerful live set to the room hosted by the Russian club.


- PØLI
Co-founder of HEX, the Italian artist PØLI will offer his unique style, made of a blend of emotional and hard tones, bringing the whole club into an endless Techno and Trancey journey. Find him in the Main Room causing damage on the floor, for the fourth edition of HEX at RZZ.


- Lorenzo Raganzini
The other half of HEX, Lorenzo Raganzini will represent the strongest and raviest shade of the HEX sound. Co-founder of the movement, he proposes a mixture of Techno with EBM and Acid touches, which land at HEX at RZZ for the fourth time.


- Neiland
A hero in his city of Barcelona, Neiland is known for his mind-bending sets, in which he showcases a hypnotic, paranoid yet powerful and grooving sound, flowing easily through the purest Techno.


- Mod.1
Another Barcelona native artist, who makes his debut at HEX at RZZ to prove why he's one of the brightest emerging talents from the local scene.